The Council is a first-in-the-nation, public-private partnership. Businesses pledge to take concrete, measurable steps to eliminate the wage gap in their company. 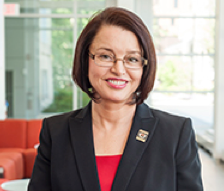 Dr. Zorica Pantik became the president of Wentworth Institute of Technology, and the first female engineer to lead a higher-education institution of technology in the United States, in 2005. Under her leadership, Wentworth became a master's degree granting institution by starting four graduate programs (architecture, construction management, facility management, and technology management), and it is on its way to achieving university status. Additionally, the Institute has extended its science, technology, engineering, and math (STEM) offerings by introducing six new undergraduate engineering programs – including biomedical engineering - as well as its first three-year program, B.S. in Applied Mathematics, and its first interdisciplinary program, B.S. in Computer Information Systems. Student enrollment has increased by 15% to 4,000, and the average combined math and reading SAT scores increased by 58 points to 1,112. Wentworth has enhanced its experiential-learning educational model by implementing EPIC Learning (Externally-collaborative, Project-based, Interdisciplinary Curricula for learning) and is focusing on innovation and entrepreneurship. The Institute earns annual recognition in national and regional rankings by U.S. News & World Report, The Princeton Review, and has been ranked by PayScale among the top 10% U.S. schools in terms of return on investment.
Dr. Zorica Pantić serves on various boards and professional organizations, including the Board of Directors for the World Association for Co-operative Education, American Association for Presidents of Independent Universities and Colleges, New England Association for Schools and Colleges, Massachusetts Workforce Investment Board as well as the Presidents Council for the NCAA Division III. Before joining Wentworth, Dr. Pantić was the founding dean of the College of Engineering at the University of Texas at San Antonio; director of the School of Engineering at San Francisco State University; Fulbright fellow at the University of Illinois at Urbana Champaign; and associate professor at the University of Niš, Serbia. She has received her B.S., M.S., and Ph.D. degrees in electrical engineering from the University of Niš.